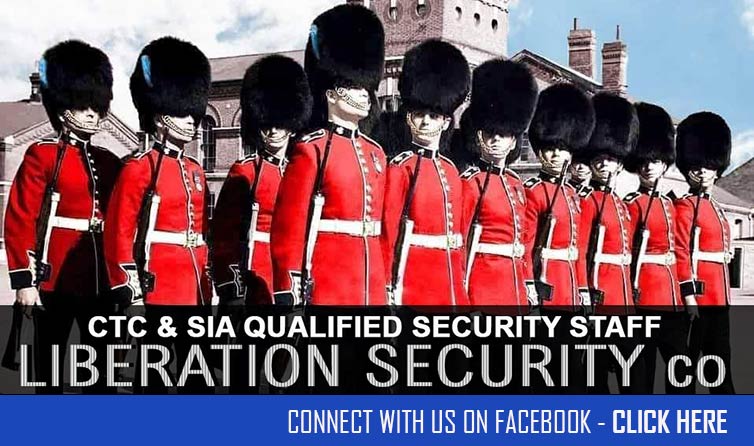 WE CAN KEEP YOU & YOUR EVENT SAFE & SECURE

From 2022 we can offer a full service relating to SECURITY PLANNING & CONSULTATION for your events. We now carry (Counter Terrorism Clearance) & (Security Industry Authority) Qualified security staff. With TTMBC Enviromental & Stage 3 First Aid to respond to new requirements at all events from 2022 onwards.

For more information email, call or Connect with us on FACEBOOK @ LIBERATION SECURITY co 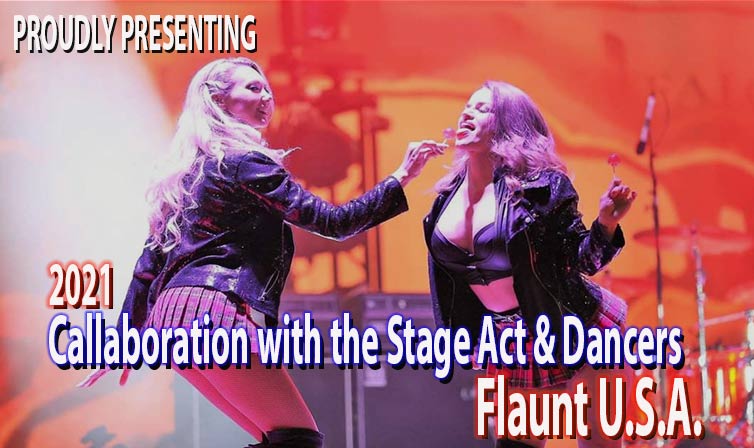 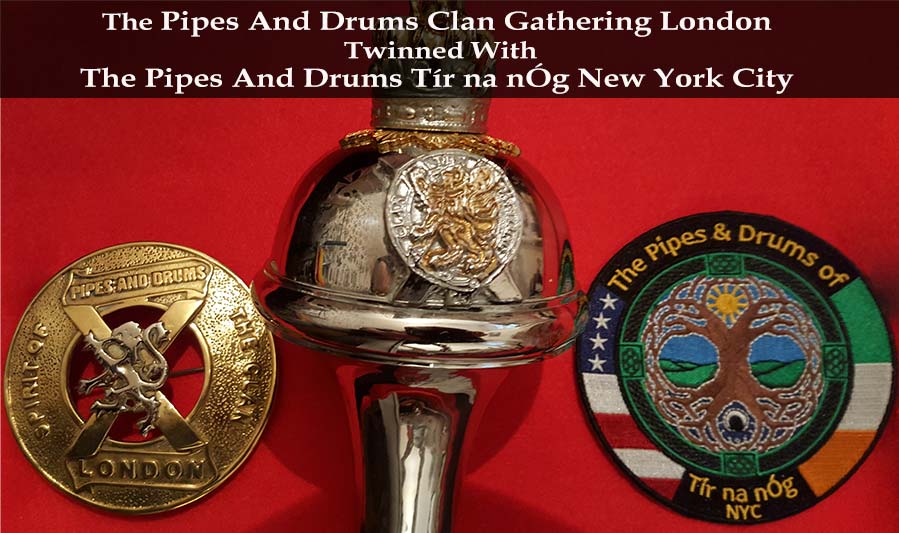 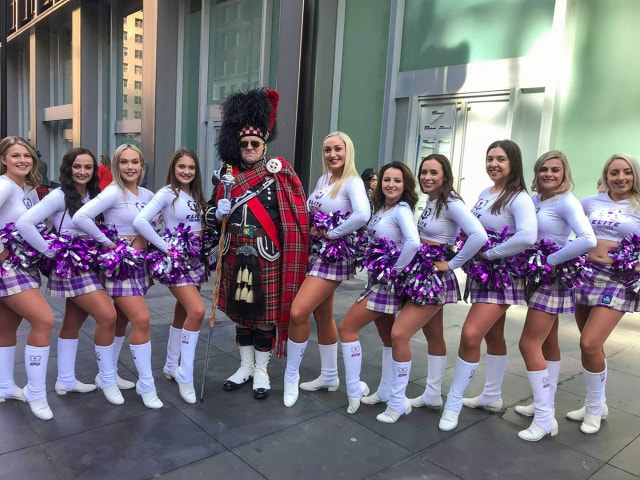 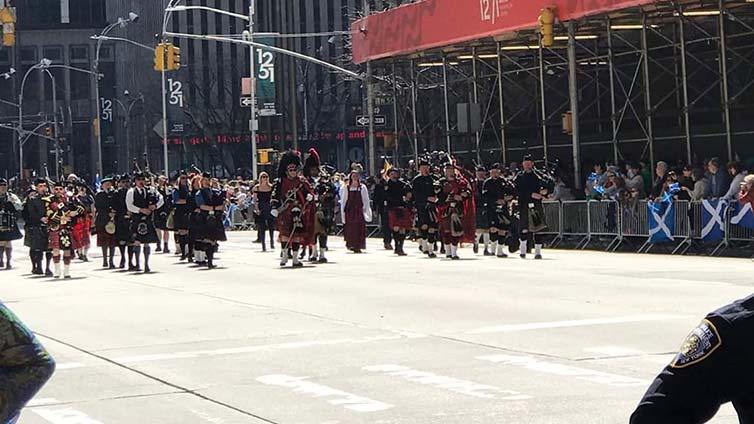 WOW! Year 6 in the can and several gigs into year 7 as I write up another years notes for CelticLondon & The Pipes & Drums Clan Gathering London Network


As ever we go very much from strength to strength with the last 12 months kicking off in style. With Burns events & the amazing event at London’s West End Marriot which was full complete with a 3 course meal with wine & Champagne followed up by transport in style. Then staying in London’s brand new 'W' hotel in Soho! Eggs Benedict for breakfast! lovely! Many thanks to Drums & Roses for that. It was also great catching up with Keith Christie and the lads from The Royal Regiment of Scotland as well (pics in galleries)

The next big event was our 2nd United States Tour to New York City! We were guests of our twinned band Tir na nOg from the Bronx and this year we took our own very amazing guests Clan an Drumma (pics in galleries).

Some great down time & some holiday travelling upstate to the home of President Franklyn D Roosevelt's estate at Hyde Park, NY. Wow, The history between our 2 countries UK & USA, WWII, Churchill & Roosevelt is really amazing stuff to say the least!
A great week topped off by the Tartan Festival Parade along 6th Avenue no less with the parade Marshall Ms KT Tunstall leading. Thanks again to Pipe Major Dr Daniel Fink & the amazing Drum Sarg Mr Mitch Kaplan.

The middle of the Drum Major & bosses year was taken up with a somewhat Army Society style wedding as we had block booked The St Audries Bay Estate (Manor House, Church grounds & lodges) in Somerset, England for the weekend. Being guests of Sgt Ashley Kelly & our Daughter Hayley was a very humbling experience and to have some very heavily decorated soldiers fly in from far & wide not least to mention the entire San Francisco California Family & 200 family friends who joined us, many travelling from Scotland, Ireland & the United States of America.
We also had a lot of fun getting the Rifles No1 Uniform made in miniature for lead page boy Teddy (4 years old).

A Massive year for the Royal Air force & RAF 100 through family ties with David’s Father (Coastal command Catalina/Sunderland) and an Aircraft Fighter Designing uncle (Harrier & Hunter) with many friends in the various RAF Bands, a whole raft of invites to a lot of one off special events followed (all in galleries).

It is not possible to mention every event & gig in detail as there were just too many! so will mention a few highlights..

The Isle Of Wight Highland Gathering pics on here. David being the only Drum Major in Full Highland No1 kit in 35°c of heat wave! Various RBL Events for WW1 & Armistice, etc.

Birmingham International Tattoo no.3 guesting with The southern Highlanders for the 2nd time, a great weekend was had and a great spectacle at that amazing huge venue (with special thanks to Senior Drum Major Mr Paul Lumley for the lift and the banter in the car).

A very special V.I.P Invite to the Street Requiem Concert UK Tour by Manhattan and New York's Highland Divas with a 150 piece choir. Pipes by our friend Mr Antoine Doherty & various virtuoso performances from international stars from stage & screen (Matilda/Les Mis/Phantom of the Opera, etc). A Huge Honour and all in aid of The Choir with No Name at the Westminster Halls London Venue.

We hope you enjoy the more efficient speeded up website... Spirit of the Clan. 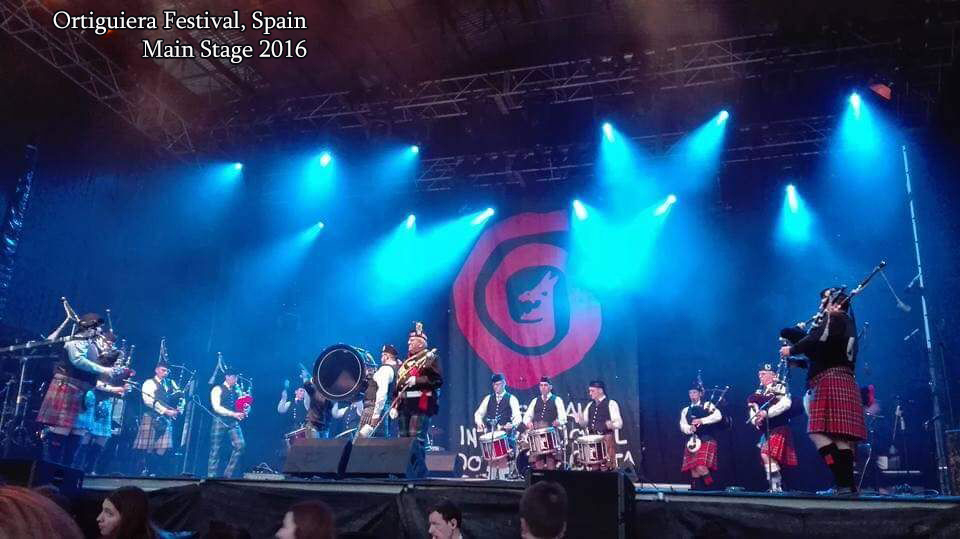 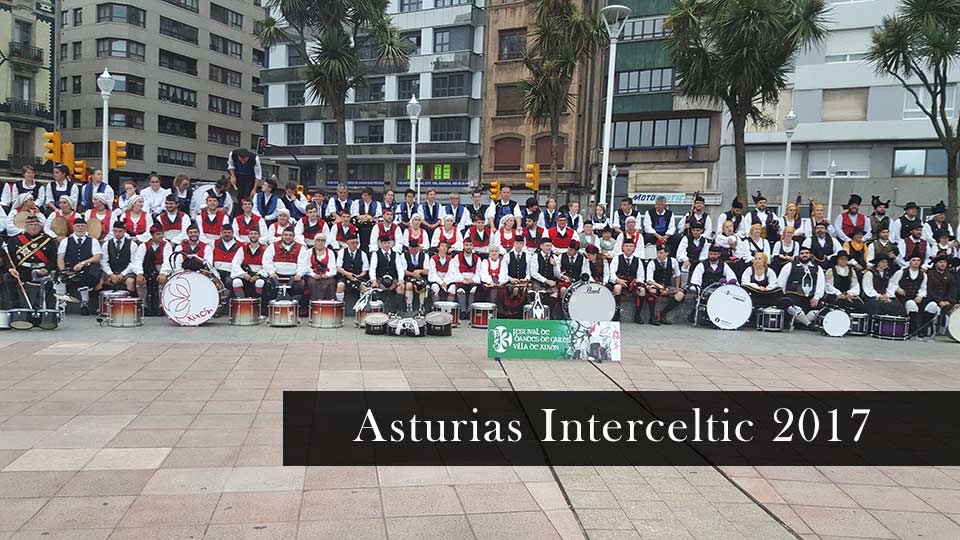 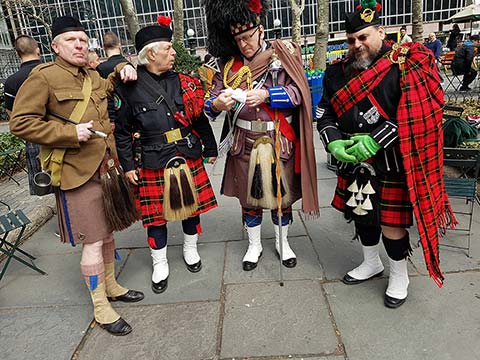 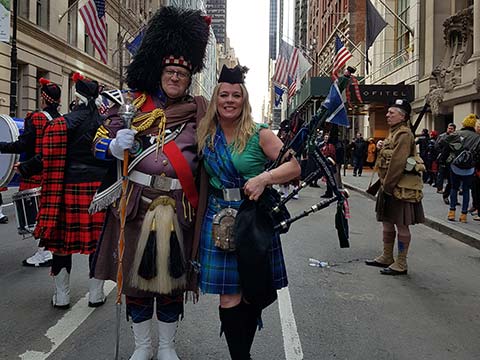 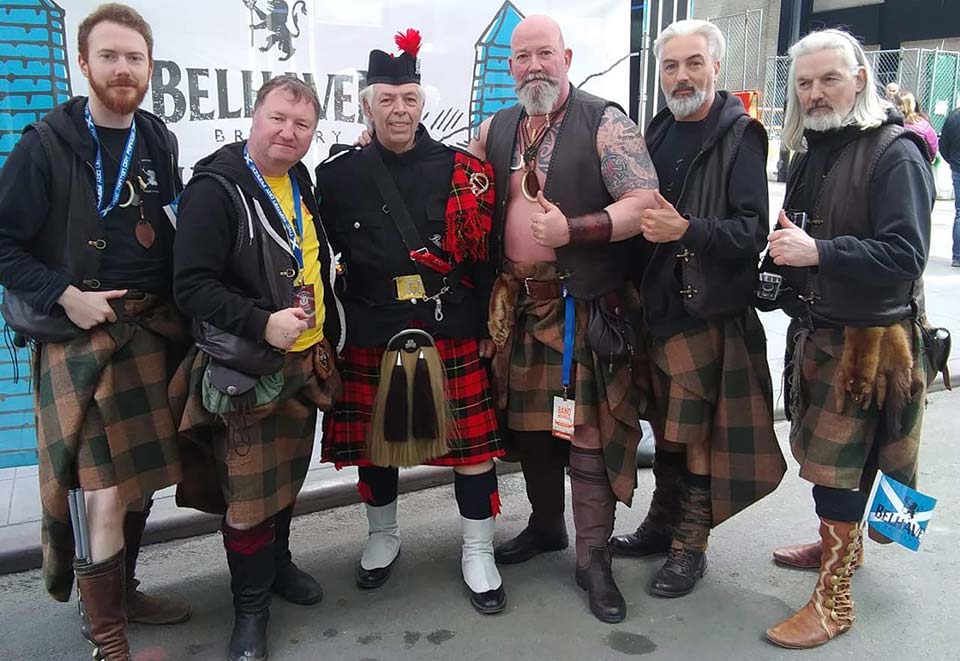 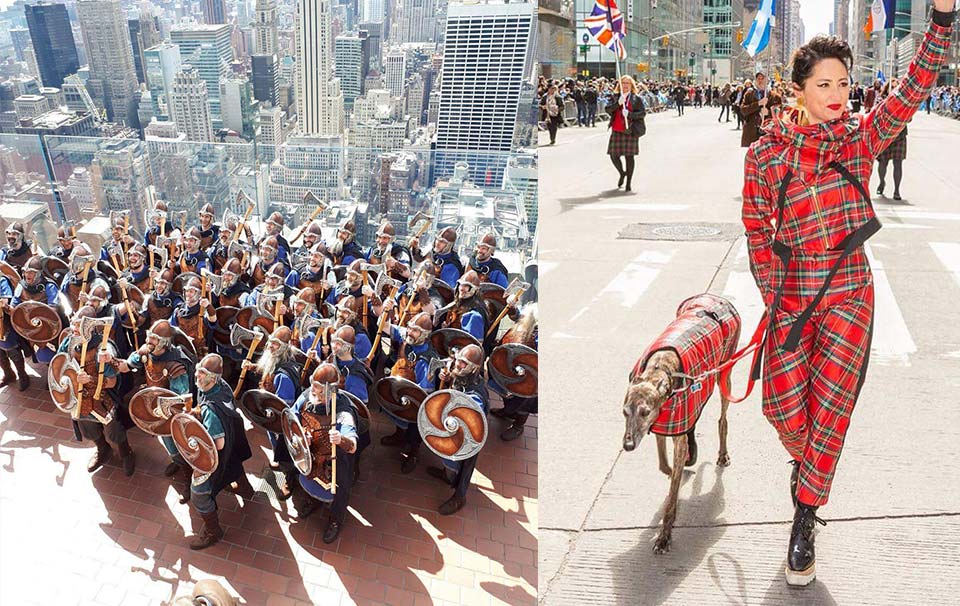 We’ve had an amazing 12 months [2017] which yet again kicked off in style with Burns events and then a very big new venture across the pond to the Big Apple, New York.


We supported our friends Wight Hot Pipes with CELTICLONDON laying the ground work for their first trip to New York & culminating in the iconic BB King's gig in Manhattan {after Parade Party}. There are now an amazing array of photos in our new 2018 photo gallery and many more on Facebook. We all had an absolute blast!.


Our Drum Major {great to see the Clan Gathering cap badges and belt buckles in New York} taking the band Tiir Na Nog & illustrious guests along 6th Avenue in some considerable style! Many, many new friends were made. An exceptionally big thank you to Mitch Kaplan & Pipe Major Dr Daniel Fink for being great hosts and now great friends as well.

While out in New York, other members of the band were entertaining at a corporate event at the iconic Union Jack Club in Central London. We always really enjoy the unusual and it was fantastic doing a big Indian Wedding complete with dancing Horses!!!...what! & Indian Dholl Drummers!!..

A bunch of us did another 2 German tours with our friends at the Scottish Music Parade bringing our tally over 3 years to 5 tours & around 30 stage shows all over East & West Germany amazing! We had a great band trip to Northern Spain staying just outside a small fishing village and port called Luanco!

In May our Drum Major/Drummer & now fully fledged actor David Morris or 'Frank The Hat' as he is known to some now, Ha ha! turned 60 & got a fantastic holiday {from the Morris family} to Nice & The Monte Carlo Grand prix!.

Never being one to miss an opportunity for potential gigs, an invite was received to a corporate Johnny Walker whisky jolly up, cards and chats about Pipe Bands, etc ensued of course.

Arnhem beckoned for a third time, the Drum Major having to complete certain engagements disguising a broken arm {in true showbiz style the show must and indeed does go on} but Arnhem Market Garden is a great privilege to be part of for all bandsmen honouring the sacrifice of all those young men all those years ago, THE VETS very few in number now sadly.

Birmigham International Tattoo we did for a second time which is a huge spectacle & well organised by the team of Paul & Stan, etc at the Southern Highlanders.

Davids talents & profile..ha ha! seems to get him various invites to a wide range of things and was a great privilege to be invited by a Royal Air force band to the Major Generals Revue part of the Trooping the Colour in London!..

Remembrances of local RBL Branch & Poppy Appeal in the City Of London where the public give with great generosity was completed again.

so we’ve missed out loads but that's our year in a very brief(ish) nutshell...
bring on the next 12 months.

Playing for NYC TARTAN WEEK where they performed at the prestigious B.B.KING - BLUES CLUB keeping great company with some of the worlds very best musicians and on the ground of king of the blues himself. 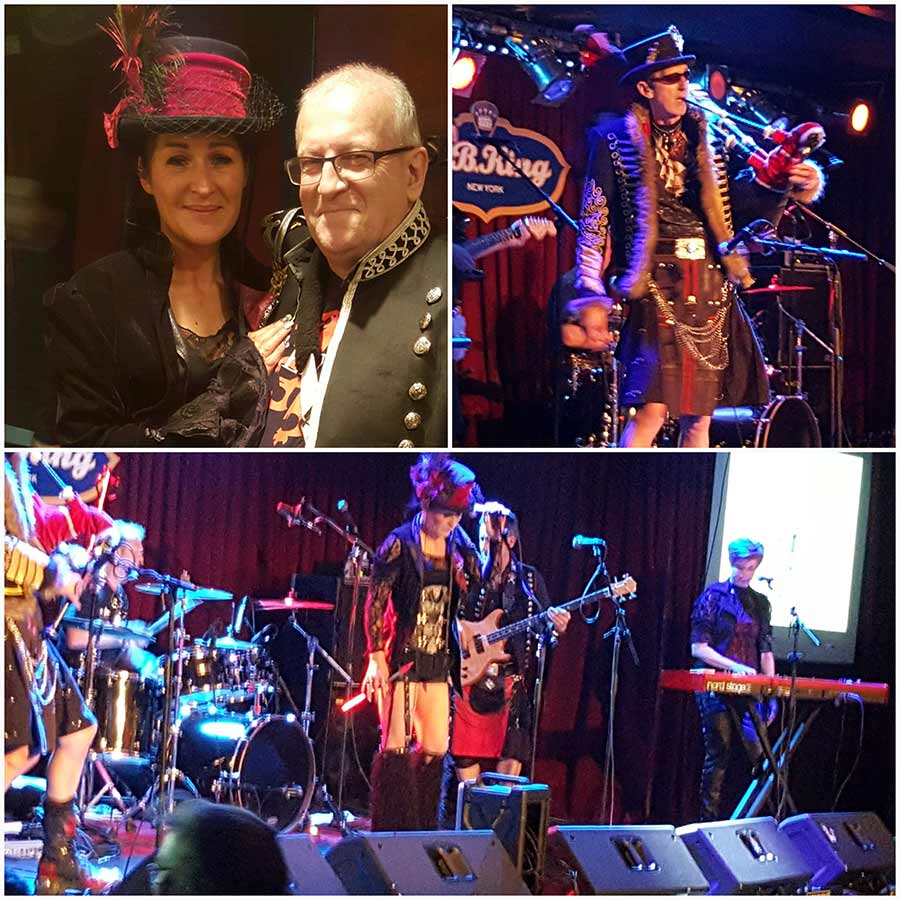 We are extremely proud to welcome Archy Jay 'The Snake Charmer' to our family.


'In a milieu dominated by big burly men, one petite young woman from New Delhi is grabbing all the headlines...' 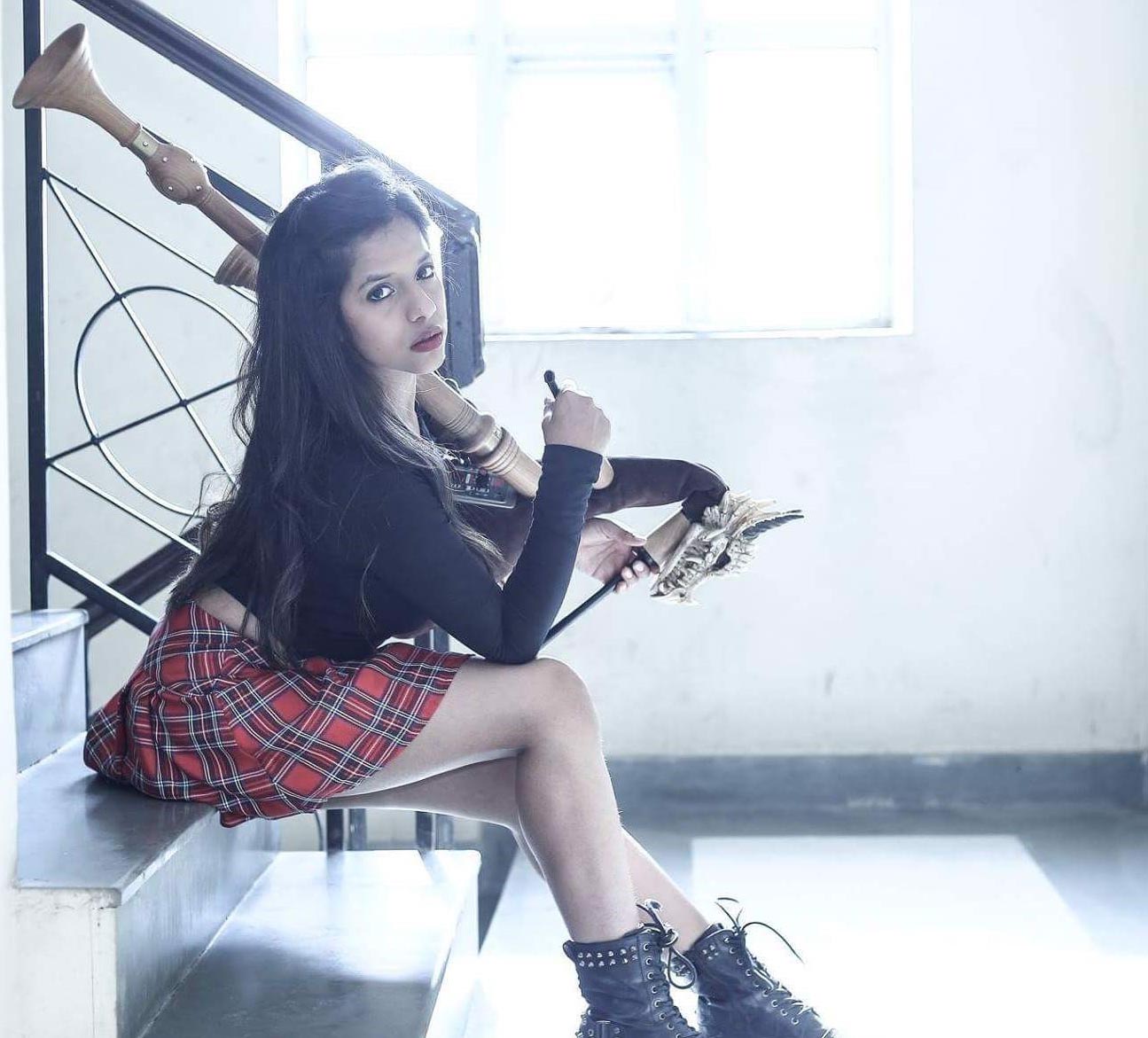 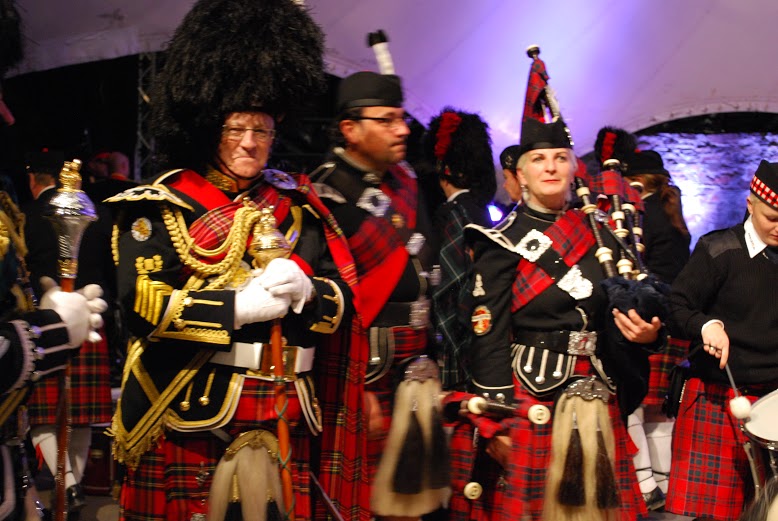 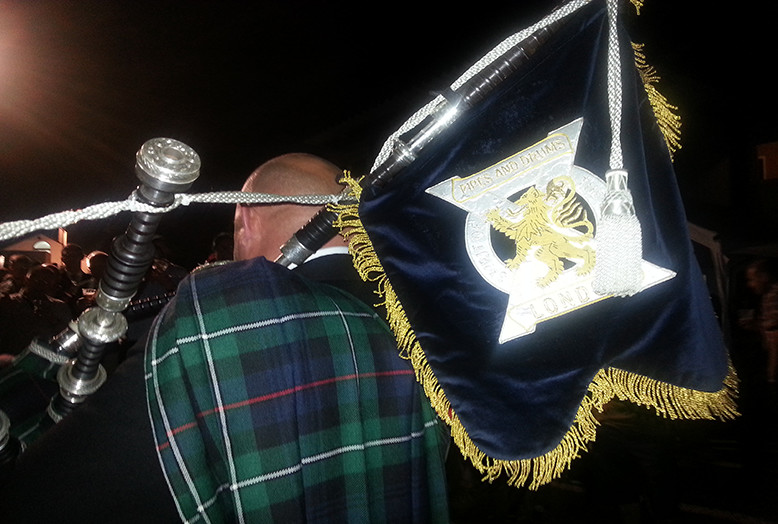 We have been very busy both with the band as whole and members of our network working with others! We have done some 9 concerts {with 3 more planned all across East & West Germany}. We have also supplied a very high class band to open The Ortigueira Festival in Galicia, Spain recently.

Some of us took part in the biggest Celtic Show on Earth the Lorient Interceltique, Brittany where we teamed up with our friends The Winnipeg Police Service Pipes and Drums'
The long list of mainstream artists we've worked with continues to get even longer with an opener for The Corrs in Concert {U BOAT PENS, Lorient, Brittany}.

There is still much more to do before we see this year out as well. 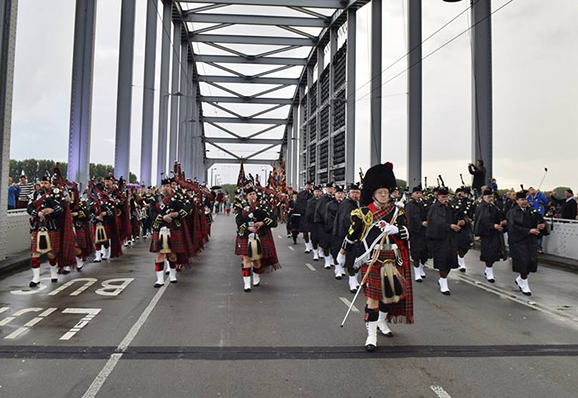 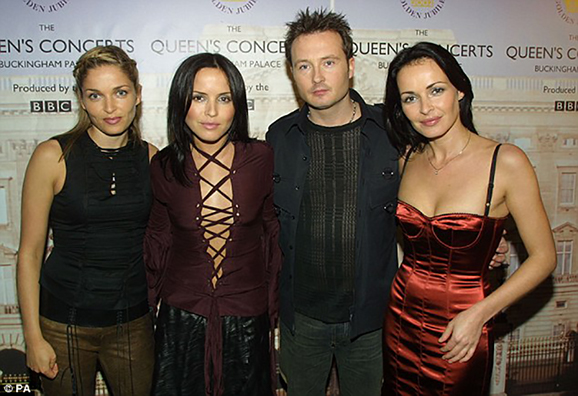 The RED HOT CHILLI PIPERS new charity single '343 The Fallen' is on iTunes now only 99p. Proceeds go to The Scottish Fire and Rescue Service Family Support Trust and The Emerald Society Pipes and Drums.

Clan Gathering were very privileged to be asked by HURTWOOD POLO CLUB (owned by KENNY JONES drummer to THE WHO, ROD STEWART & THE FACES) and more, to take part in this very unique reunion Concert.

ROD STEWART & THE FACES had not performed together for nearly 40 years before this concert and it was all done in the name of the PROSTATE CANCER UK CHARITY and it was a day we will always cherish as being very special indeed.


We were greatly honoured at being asked to participate in and be involved in the latest Universal musical & big screen production of 'Les Miserables') alongside Hugh Jackman, Russell Crowe and many others. We have played at 'The Royal Albert Hall ', Piping & drumming at weddings and funerals, PLUS being involved with the 'Big Beat Drummers' with their haunting tribal sound. We can arrange for all types of 'Highland & Irish Dancers' and the list continues to expand where Celtic Entertainment is concerned.

Email, Call, Text or find us on Facebook so we can can arrange something perfect for your event all tailored to your every need. We have experienced most things but always enjoy a challenge as well